The kitchen smells scrumptious with wafts of lemon, vanilla, cinnamon and custard.  I have made pastiera, an Easter tradition I have come to of late.  Another taste of Naples that we have made our own.  I didn’t grow up with this luscious dessert, although Jim did.

The first time I ever tasted pastiera was in Salerno.  It was Good Friday and we decided to have an adventure.  We would go from Naples, fifty or so miles south to the Cilento region.  There we would try to find my father’s town, Campora, and visit my cousin Maria who still lived there.  It seemed like a short distance, but getting there was not so simple.

We took the train from Naples to Salerno, a charming port that butts up against mountains.  Salerno is Naples’ equal in richness of history, but its opposite in spirit.  Salerno is a quiet, clean city that scintillates when the sun hits the harbor.  It is at the end (or beginning) of the Amalfi Coast, but is unfortunately overlooked in favor of Sorrento or Positano.

So far so good; however, getting from Salerno to Campora, we found we would have to rent a car, since there was scarcely any public transportation.  This was easily done, but before heading to Campora, we decided to see a bit of Salerno.  We didn’t have much time – only a couple highlights, but what we did see was noteworthy.

We wandered around the historic center, straying into courtyards and peering at antique fountains.

Thus, we came upon the Medieval Aqueduct.  We read on the historical marker that it was built in the ninth century and was called “Devil’s Bridge” because it was said to have been built in one night with the help of demons.

During the ninth century Salerno was under Lombard rule, but not Naples.  The Lombards were a Germanic tribe that invaded Italy in the seventh century.  Their rule stopped just beyond Salerno, never reaching Naples, which was still nominally part of the Eastern Roman Empire, although really an independent dukedom.  (Yes, the Empire still existed, ruled from Byzantium.) 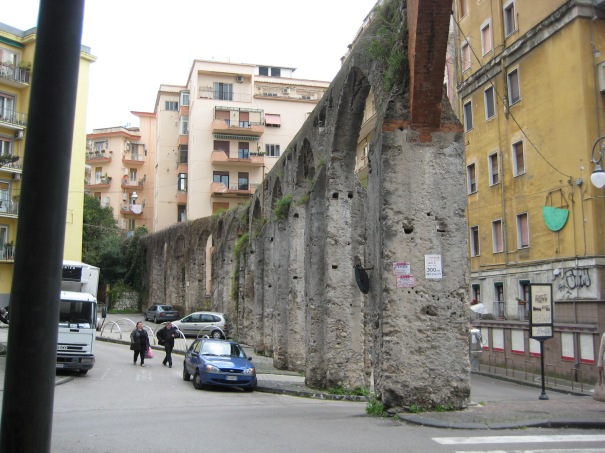 Next, we made our way to the Cathedral of St. Matthew, originally built around 1070’s, when all the south of Italy had been conquered by the Normans.  (The Normans conquered England during the same century.) 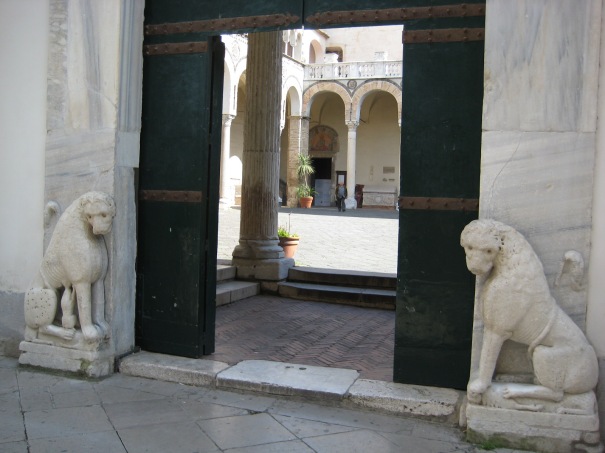 The cathedral was completely re-built after having been destroyed by an earthquake in the seventeenth century, but bell tower dates back to the thirteenth century.  The cathedral is said to house the tomb of the Apostle St. Matthew.

After so much sightseeing and before our long winding drive to Campora, it was time for lunch.  We found a restaurant near the train station (and also close to the car rental office) and there I had my first taste of pastiera that Good Friday in Salerno.

The next Good Friday we were in New York again.  Hunting through my cookbooks, I found a booklet called “Great Recipes” that had come in the mail in 1983, and included a recipe “Neapolitan Wheat Pie (Pastiera Napoletana)”.  I found wheat berries in Little Italy, although I had to ask for “grano” because they didn’t know what wheat berries were.  I felt right at home.

So, I have been making pastiera for Good Friday ever since and would love to share the recipe.  Since I am dairy intolerant, I have included non-dairy substitutions.  The recipe is not difficult, but takes time, so I make a few days before I want to serve it.  The flavor only improves.

In the meantime, make the

2,         Beat egg yolk and milk together and stir into the flour mixture.  Gather the dough into a ball, wrap in plastic foil and chill at least 20 minutes.  (While the wheat berries and milk are cooling.)

Putting it All Together

6 eggs at room temperature, separated (You can also add the egg white left from the Pasta Frolla.)

Note:  To develop its full flavor, this pie should stay overnight in a cool place or be refrigerated. 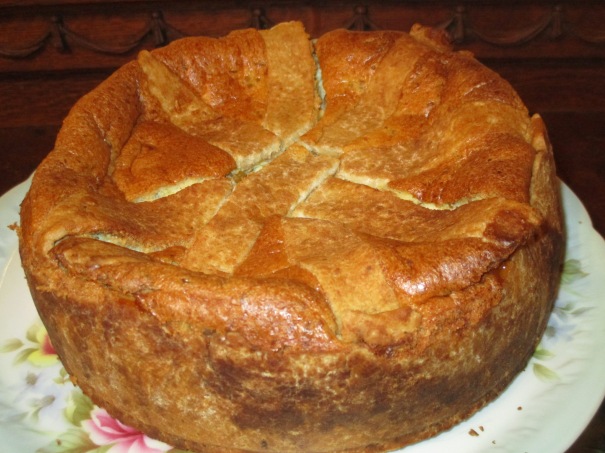